Aluminum and its alloys

12 Apr Aluminum and its alloys

Posted at 17:29h in Notes of Interest by Diego Galmarini
0 Likes
Compartir

Aluminum and its alloys

Even though that him aluminum Pure is a little used material, there is the paradox that the alloys of this material are widely used in a wide variety of applications both industrially and at other levels. Therefore, we will see its classification, states and most common designations:

Classification by its process

Aluminum alloys (both forged and molded) are classified according to the alloying element used (at least the one in greater proportion).

F: Gross state. It is the material as it leaves the manufacturing process.

OR: Annealing It is applied to both forging and casting materials that have undergone full annealing.

O3: Homogenized This designation applies to wire rods and continuous casting bands, which are subjected to high temperature diffusion treatment.

W: Heat treated solution. It is applied to materials that after receiving a heat treatment remain with an unstable structure and suffer natural aging.

H: State of Acrimony. It comes with materials that have been hardened by deformation.

H1. Hardened by deformation until the desired level is obtained and without further treatment.

H4. Acrimony and lacquered or painted. They are cold hardened alloys that can undergo a certain annealing in the curing treatment of the given paint or lacquer layer. 7This classification uses a second digit (sometimes a third digit is necessary) that indicates the degree of strain hardening.

T: Denominates materials that have been hardened by heat treatment with or without hardening by subsequent deformation. The designations of W and T only apply to aluminum alloys already forged or cast iron that are heat treatable.

T1: Chilled from a manufacturing process carried out at a high temperature and aged naturally.

T2: Chilled from a manufacturing process performed at a high temperature, cold swallowed and naturally aged.

T4: Solution heat treated and aged at Tamb until a stable condition is reached. It is a treatment similar to T3 but without cold work.

T6: Solution heat treated and artificially aged. Products are thus designated that after a high temperature forming process (molding or extrusion) they are not cold hardened but suffer artificial aging.

T10: Chilled from a manufacturing process performed at a high temperature, cold worked and artificially aged to a substantially stable condition.

There are variants of the T state, to these variants two digits are added to the T. These two digits are specific to each product and are used for stress relief status in products manufactured through the forging process.

Aluminum series according to their alloys

Aluminum alloys (both forged and molded) are classified according to the alloying element used (at least the one in greater proportion). The most commonly used alloying elements are: 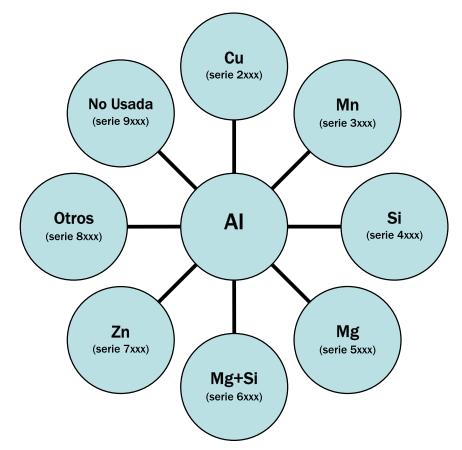 Finally, say that except for the 2219 alloy, these alloys have poor weldability but very good machinability.

Therefore there are very few alloys of this series. However, aluminum 3003, 3 × 04 and 3105 are widely used to manufacture utensils that need medium hardness and that good workability is necessary to manufacture them such as bottles for drinks, kitchen utensils, heat exchangers, furniture, traffic signs, roofs and other architectural applications.

Alloys with a high Si level have a range of colors ranging from dark gray to carbon color and are therefore being demanded in architectural applications. The 4032 has a low coefficient of thermal expansion and high wear resistance, which makes it well placed for use in engine piston fabrication.

The main characteristics of these alloys are medium to high hardness due to strain hardening, good weldability, good resistance to corrosion in the marine environment and a low capacity for cold work. These features make these alloys used for decorative, ornamental and architectural ornaments, in the home, street and road lighting, boats, ships and cryogenic tanks, crane bridge parts and car structures.

These alloys can be modeled by a TT T4 and hardened by a series of actions that complete the TT T6. Its use is usually that of architectural applications, bicycle frames, bridge railings, transport equipment and welded structures.

It is also normal to add other alloying elements such as Cu or Cr in small quantities. Because the main property of these alloys is their high hardness is often used in the structures of airplanes, mobile equipment and other highly forced parts.

Because this series shows a very low resistance to corrosion under tension, a TT is usually applied slightly to achieve a better mixture of properties.

You may also be interested in articles on Aluminum Types and Our Products.

We assist you in everything you need to Aluminum

Send us your question by filling out the form and we will respond as soon as possible. You can also contact us directly through WhatsApp or call our phone number.

Excellent attention, I have resolved the doubt. Thank you